If you live with a tween, here’s the possible effects of hormones on your daughter:

? (happy) “Hi Mom! I had a good day at school. I’m going to go text Julie (aka best friend) about the awesome new outfit you bought me. Thank you!”

? (angry) “OMG! I’m so mad. I can’t believe Julie has the same outfit as me! She’s so rude. She said I can’t wear it to school tomorrow because she is. I’m so done with her.”

Ten minutes later (after an unsuccessful attempt at a rational discussion)….

? (sad) NO! I won’t come down to dinner. My life stinks. I hate school. I hate my friends. And I hate your cooking.

? (smirking) Soooo….mom….if I come down to dinner and eat your delicious food, will you drive me to Karen’s house tonight for a sleepover? Julie’s going over there and we all want to watch a movie together.

You can pretty much blame the multiple unstable emotions on the teenage brain. There is a large part of puberty that happens on the inside, and isn’t as noticeable as growing breasts and hair that you can see on the outside. There are (raging) fluctuating hormones being released by the brain, which affects emotions. And while adults still feel all of these..feelings, the teenage brain is still learning how to better control all of their emojis. The frontal lobe is the area of the brain that can weigh the consequences of actions, and in an adolescent, the frontal lobes aren’t ready for the task yet. Dr. Jensen, a pediatric neurologist from Boston, is quoted in NPR saying, “They aren’t yet at that place where they’re thinking about — or capable, necessarily, of thinking about the effects of their behavior on other people. That requires insight.” And we need our frontal lobes to be fully developed to help us with insight. So yes…tweens and teens can actually use this as their “excuse” for some things…you will just have to learn where to draw the line. 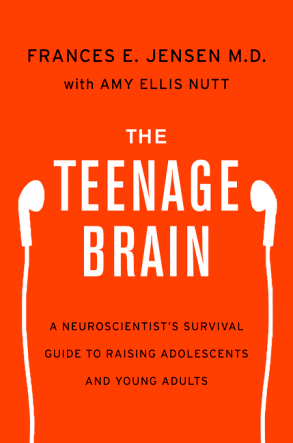 Check out this book to read more about your teen’s brain:

For Girls ages 8+ and a Parent to learn about puberty

Body Basics for Boys (B3)

For Boys ages 10+ and a Parent to learn about puberty

Being My Best Self for Girls

For Girls ages 8+ and trusted adult

A Program Just For Parents

A mental health workshops for boys and girls ages 8-12